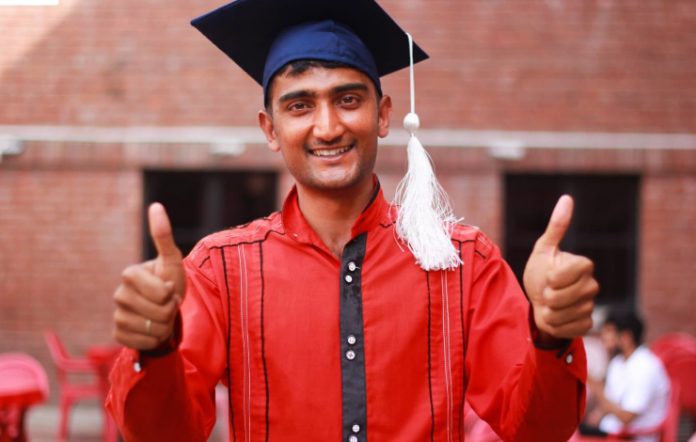 Ansar Ali’s from serving plates at LUMS to Holding Degree at SZABIST, with a little support from those around you, anything is possible, proved a waiter at one of the country’s top Universities.

Ansar Ali, who worked in a Restaurant as a waiter at the Lahore university of management sciences (LUMS) campus, could only dream of receiving the same level of education as the students to whom he would be serving hot barbeque plates.

Ansar, who hails from Nankana sahib in Punjab, was forced to drop out of school in the ninth grade to help support his family after his father died unexpectedly. “As a kid, I enjoyed going to school. I remember being one of the brightest students in my class,” he stated.

Despite his misfortunes, Ansar maintained a positive attitude and was one of the most famous waiters on Campus. “Even though the odds were stacked against me, I was still aware that I was surrounded by students with whom I could communicate and learn,” Ansar said of his time at LUMS.

“You could never say from his smile the sadness it masked,” wrote salaar khan, who served as the president of the LUMS student council from 2014 to 2015 and is the person who posted Ansar’s story on twitter. Salaar wrote in a thread that has received thousand of likes and retweets,” To have been so fond of education, but complelled by circumstance to turn away is one thing.”

Not only did the LUMS Student body establish a GoFundMe account for Ansar, but they also set up donation boxes on campus to collect funds. Ansar, who had to do his intermediate on his own, wrote a note on the wall of his rom to keep him motivated for the test.

“I will score 800+,” it said. His hard work paid of off, as he earned an A grade after scoring over 800 points on the exam. It was the time for him to enroll in a university. He received a partial Scholarship to SZABIST in Islamabad.

In two months, Ansar will finish his Bachelor’s degree in accounting and finance.