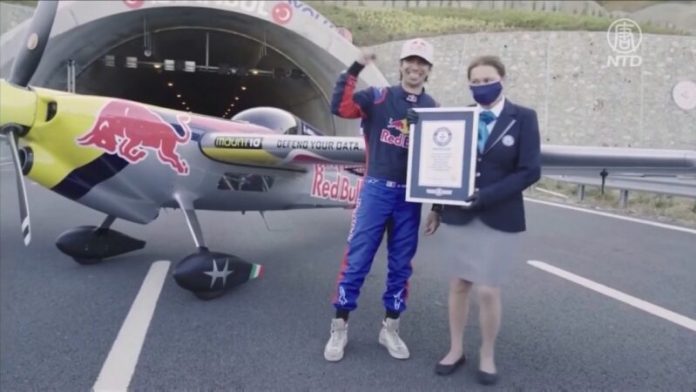 The First person ever to fly plane through two tunnels, sets world record, stunt pilot first navigated through 360-meter tunnel, followed by the longer one that measured 1,160 meters.

An Italian stunt Pilot Dario Costa has left netizens stunned after he effortlessly flew an aircraft through two tunnels in Turkey’s Istanbul.

Italian air-race competitor and stunt pilot Dario Costa made it to the Guinness Book of world records by flying an aeroplane through two tunnelsin Istanbul, Turkey. Mr costa’s world record is for the longest aeroplane flight taken trough a tunnel for a distance of 1,730m. The video of this flight was released by Austrian company Red Bull on Facebook on September 4,2021.

The video has already received 1.4 lack reaction and has been shared 62K times. Mr Costa’s flight is seen taking off inside one of the catalca Tunnels outside Istanbul. As the flight propels forward, it is airborne before exiting the first Tunnel.

Second tunnels is a long one but Mr Costa blasts through it with ease. Soon after coming out of the second tunnel, a camera inside the aircraft shows him screaming and weeping in joy.

Satellites Spotted a large plume of methane leaking from one of...