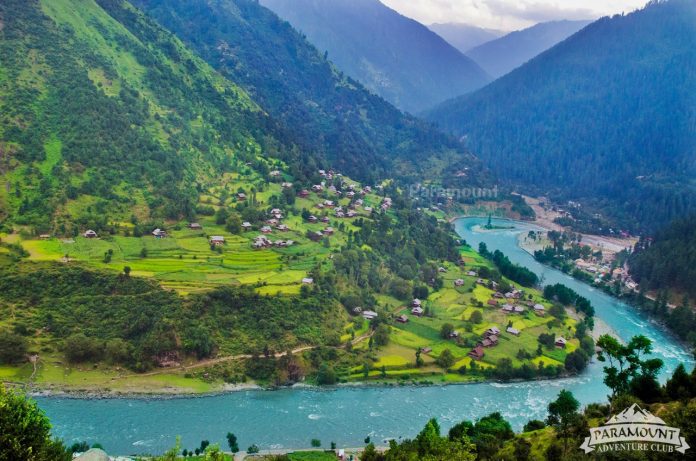 Neelum valley Azad kashmir is situated to the North & North East of Muzaffarabad. Running parallel to the Kaghan Valley, it is separated from it by snow covered peaks, some over 4000 meters above sea level. Excellent scenic beauty, panoramic view, towering hills on both sides of the noisy Neelum River, flourishing green forests, streams, high altitude lakes and attractive surroundings make the valley a dream come true. The area is also ideal for mountain tourism.

About 240 kilometers long the picturesque A part of Nanga Parbat Massif falls in this area which is dominated by “Sarwaali Peak” (6326 meters) the high mountain in Azad Kashmir. Moreover like Kaghan Valley it is famous for fishing and angling activities in Neelum River and Jagran Nullah which are stocked with trout fish. A fair weather road opens the valley to tourists up to Kel, 165 kilometers from Muzaffarabad.

Coaches ply daily on this route and accommodation facilities are also available at places of tourist attraction.

Neelum District is the northernmost district of Azad Kashmir, Pakistan. Taking up the larger part of the Neelam Valley, the district has a population of 191,000 and was then badly affected by the 2005 Kashmir earthquake

The Neelum River was known before Partition as Kishan Ganga and was subsequently renamed after the village of Neelam. It flows down from the Gurez Valley in Indian Jammu and Kashmir and roughly follows first a western and then a south-western course until it joins the Jhelum River at Muzaffarabad. The valley is a thickly woodedin region with an elevation ranging between 4,000 feet and 7,500 feet, the mountain peaks on either side reaching 17,000 feet. Neelum valley Azad kashmir is 144 kilometres long. Neelum valley Azad kashmir.

Most of the valley is taken up by the Neelum District. The district is bordered on the south-west by Muzaffarabad District, which also encompasses the lower reaches of the valley, to the north-west beyond the mountains lies the Kaghan Valley in Khyber Pakhtunkhwa‘s Mansehra District, to the north and north-east are the Diamer, Astore and Skardu districts of Gilgit-Baltistan. To the south and east are the Kupwara and Bandipora districts of Indian Kashmir. The Line of Control runs through the valley – either across the mountains to the south-east, or in places right along the river, with several villages on the left bank falling on the Indian side of the border